All Collections
Bitcoin 101
Bitcoin
Why and how do I verify my node?

Why and how do I verify my node?

Written by Bottlepay Support
Updated over a week ago

At Bottlepay, we aim to be a safe, accessible platform that provides the best possible introduction and experience to the future of finance. We like to think we mix the best of both worlds, combining conventional currencies with new innovations such as the lightning network.

As a custodial wallet and a registered crypto-asset provider, we have implemented our own interpretation of the regulatory framework under which we operate, applying this to the way we facilitate payments through the lightning network.

The lightning network is a privacy first protocol, with both public and private nodes on the network. We take a risk based approach to payments flowing in from the network and processing payments out to the wider network.

For payments to a private node on the network where the destination is essentially unknown (by design) we have a simple flow that allows you to prove ownership or control over that node by signing a message with the node's private key. This is a quick one-time process that once completed, will allow you to send funds (bitcoin or conventional currency) to that node uninterrupted for as long as it is alive on the network.

How to link your lightning node

After scanning or pasting in a Lightning Invoice you may have been prompted to verify your node. Tap ‘Verify my node’ and you will be prompted to create a new invoice from your external lightning node which includes the amount and a memo provided by Bottlepay.

In the example below, the invoice from your lightning wallet connected to your private node should include 100 sats and the memo bottlepay:236393248019890.

Create a lightning invoice (in this example we have used Breez, entered 100 sats and included the memo): 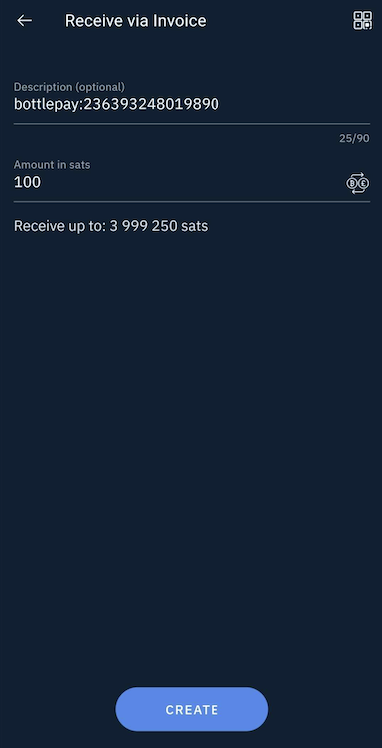 Once you have created the invoice, please scan or copy the lightning invoice into the Bottlepay app as shown below.

Please note, no payment will be sent.

Success! All future payments to your node will be without interruption.

This method of signing a message with your node's private key is compatible with all lightning implementations. It works with almost all wallet apps, only Muun wallet is unsupported.

Did this answer your question?